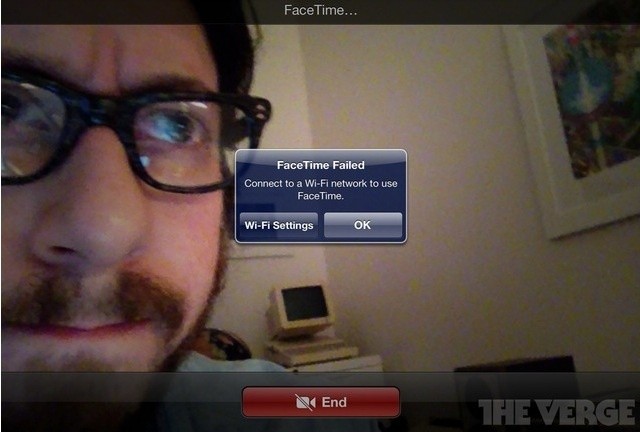 One would think that if Apple wanted FaceTime to be popular, they would force carriers into allowing it over cellular data. There was plenty of speculation as to whether or not the new iPad would change this predicament. Well official reports state that FaceTime still won’t work like this with the new iPad. The Verge recently confirmed this when they received their new iPad

This to me makes absolutely no sense. So carriers are worried about data consumption, and as greed and stupid as I think that is, we also do pay for these data plans. We are given a limited amount of data to use each month on our wireless devices. (Except those who have unlimited plans.)

Now don’t get me wrong I understand that Verizon / AT&T or whomever may not want this feature available for users with unlimited data plans.Video takes up a lot of bandwidth which will drain their precious data banks quickly. But when your allotted 2-5GB a month to surf the web as you please, then why can’t you waste your data using FaceTime.

And don’t even say it will stress the cell network. That’s a pointless comment because there are hundreds of thousands using other methods for video chatting with their Apple Devices over cellular data.

I mean it’s not like there aren’t any other apps/services available to video conference over 4G/3G connections. This all doesn’t add up. You’d think if they were worried about data consumption, they’d ban all these apps (let’s hope I didn’t light the fuse…). That being said, the FaceTime policy just doesn’t make an inch worth of sense…

Also, you can easily accomplish this with a Jailbreak for either iPhone / iPad

What do you think? Should we be able to waste our own data plans?