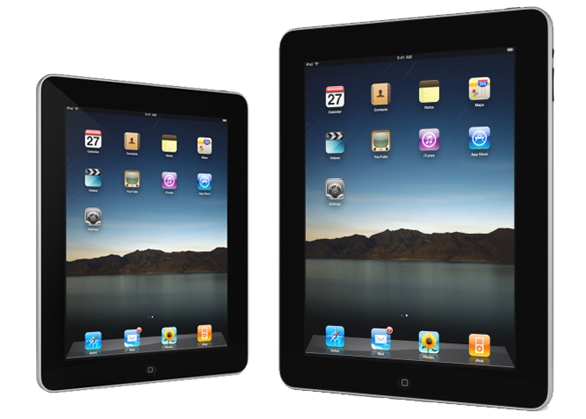 Over the past couple of years there have been whispers of Apple coming out with a so called “iPad Mini” which would supposedly have a 7-inch display. However, when asked about the “iPad Mini” the late Steve Jobs continually said that he believed  7-inch devices were too small for users and that “manufacturers of 7-inch tablets would need to ship sandpaper with the hardware, so users could file down their fingers to the point where they could hit smaller targets on the screen.”

Nevertheless, new “iPad Mini” rumors have been swirling around over the last month or so that Apple is experimenting with a prototype iPad that has a 7.85-inch screen and a resolution of 1024 by 768 pixels. In fact, one analyst believes that we could see an “iPad Mini” as soon as September…

Analyst Brian White said earlier this morning in a note to investors that during his trip to Taiwan he has continued to hear whispers that Apple is planning to release the so-called “iPad Mini” this September.

White went on to say that he believes a smaller iPad for a lower price would attract more price sensitive customers as well as offer an alternative for those who want a smaller tablet. In particular, White suggests that the “iPad Mini” could be a big hit with schools who have budget limitations and can’t afford the current $399 iPad 2.

White’s info comes out on the heels of a new survey released by data research company ChangeWave on Tuesday showing that 14 percent of North Americans interested in buying a tablet would be “somewhat likely” to purchase a smaller iPad, with 3 percent  saying they would be “very likely” to purchase one.

ChangeWave vice president of research Dr. Paul Carlton had this to say on the rumored iPad Mini:

At the moment, the greatest competitive threat to the new iPad could well be the iPad Mini — which doesn’t exist yet, but even if it does, it too will be made by Apple