One in Five Macs Have Windows Malware 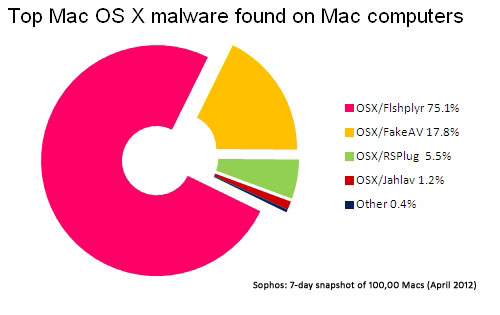 A recent study found that 20 percent of Macs actually harbor Windows malware. Now this doesn’t mean that they are infected, but that instead they store the malware which can be transmitted to Windows computers via emails or a flash drive.  This is kind of a silent infection. While the Mac user knows nothing different, any PC interaction that Mac has could be spreading the malware…

The details of this report come from Sophos following the many downloads of a free antivirus application from the company. Out of the 100,000 Macs that were reviewed, 20 percent were harboring instances of Windows malware.

Only 2.7 percent of those Macs in the study were infected by malware targeted for OS X. And unsurprisingly enough, 75% of the infections were “Flshplyr,” a variant of the “Flashback” Trojan which had infected thousands of Macs recently.

Sophos also noted that Mac users wouldn’t notice any symptoms unless they ran boot camp or another application to virtually run Windows. They also say that Mac users should be “a responsible member of society”, and make sure their Macs are free and clean from any Windows malware.

There are plenty of virus detection applications out there for Macs. And as much as I hate windows, it’s definitely important to do our part and rid ourselves of and possible problems for our computer or others.

My favorite app for Mac virus/malware detection and removal has to be MacKeeper. You can find MacKeeper here

for a pretty good price!

Have you been infected?