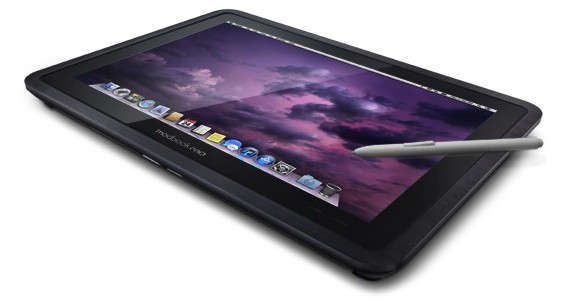 Over five years ago a company named Axiotron came out with a new device called the Modbook. The idea was to take a MacBook and convert it into a pen-based tablet with a different body and design. The idea really didn’t take off and was on and off for the next few years. Now they’re back with a surprisingly stylish reiteration…

The Modbook Pro has been replenished with life. One of Axiotron’s founding members resurfaced with a new company and a (hopefully) triumphant return of the Modbook Pro.

Built from a unique enclosure conversion kit, the Modbook Pro incorporates and completely encases the original hardware of a new Apple MacBook Pro 13.3-inch base system. Its Wacom digitizer delivers 512 levels of pen pressure sensitivity — more than any other tablet computer on the market. And its ForceGlass screen provides an etched, paper-emulating drawing surface.

The result is a sleek tablet computer run by a powerful Mac base system, with a highly sensitive pen interface and a natural drawing surface, all fused into one device you can take with you and use anywhere.

The components of the Modbook Pro connect to the MacBook Pro “guts” through one of its USB 3.0 ports. It will run a tablet based solution of OS X and will be available in “early fall.”

No word yet on retailers or pricing, but expect it to cost you a good chunk of change.

Would you buy a Modbook Pro?