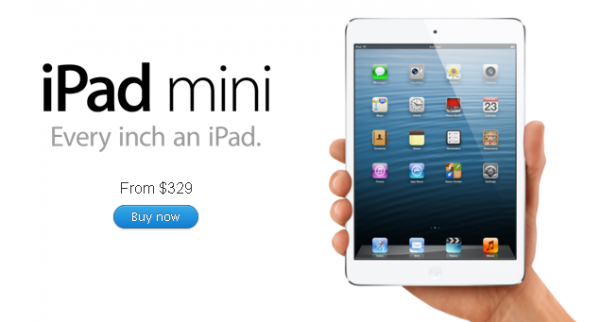 You probably already knew that the iPad mini would be popular. After less than 72 hours of preorders, the initial launch day stock has sold out. If you plan on getting an iPad mini as a gift for the holiday season, I suggest getting your order in now because these ship times are going to keep pushing further back.

Availability of the black models in the U.S. online store began to slip on Saturday, when shipping dates for the 16 GB Wi-Fi model moved to two weeks. The 32 GB and 64 GB models have now followed suit, and all Wi-Fi iPad mini models are now being quoted two-week shipping estimates. Apple is still quoting its original “Mid November” estimate for cellular-capable models in the U.S., with other countries seeing “Late November” estimates.

If you’d like to know more about the iPad mini, be sure to check out our latest podcast and listen as we compare this new iPad to the competition.