Best Buy Sells Almost As Many iPhones As Apple 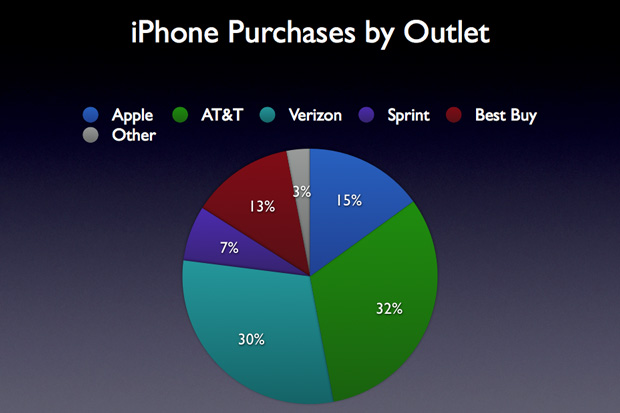 A survey from December of 2011 to February of 2012 reveals that 13% of iPhone customers had purchased their iPhone’s from Best Buy, while 15% had purchased theirs directly from Apple. As expected carriers brought in the majority of iPhone sales with Verizon at 30%, AT&T at 32% and Sprint at an unimpressive 7%.

The survey was conducted by Consumer Intelligence Research Partners and shows that surprisingly online purchases only accounted for about 24% of purchases, with traditional in-store purchases taking up the other 76%.

It’s not really surprising to see Besy Buy doing so well since they have so many locations, but it is surprising that Apple Stores don’t have a bigger proportion of sales than they do.  I’m curious to see how many new iPad’s Best Buy will sell in relation to Apple stores.

Where did you purchase your iPhone? Did you enjoy the experience or do you wish you would have picked it up somewhere else?

Oh yeah I almost forgot… don’t forget that macmixing.com is giving away a new iPad and we will be announcing the winner on Sunday April 1st during our podcast “The A Word.” Click here for more details on how you can win a brand spankin new 16GB white iPad!