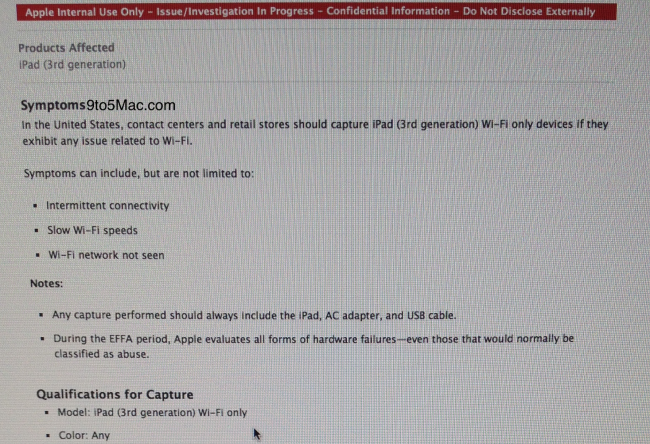 Have you been having trouble with WiFi on your new iPad? If so, you may not be alone. A few weeks back, users began to take to Apple Support Communities, concerned about WiFi issues on their new iPads. According to the complaints, users were having issues involving connecting to networks, connection dropping, and slow internet connections…

Well Apple has finally done their own homework and is coming out saying they are officially looking into it. They are even offering replacements for those who are affected by the issue. 9to5mac obtained a leaked AppleCare document that proves Apple is now looking into this issues and “capturing” devices affected with the WiFi problem.

In the United States, contact centers and retail stores should capture iPad (3rd generation) Wi-Fi only devices if they exhibit any issue related to Wi-Fi.

Symptoms can include, but are not limited to:

According to 9to5mac, AppleCare employees have been told to, “ensure that devices they test are not facing these issues due to normal software bugs, but instead because of the actual hardware components.” If a hardware issue is found, then the device, its AC adapter and USB cable, must be replaced and shipped back to Apple for further probing.

I personally have not had an issue with WiFi, but I’ve hear of others experiencing this issue. If your one of the many, you should take your shiny new iPad back to an Apple Store, and maybe you’ll leave with an even shinier and newer one!

Are you having WiFi issues?