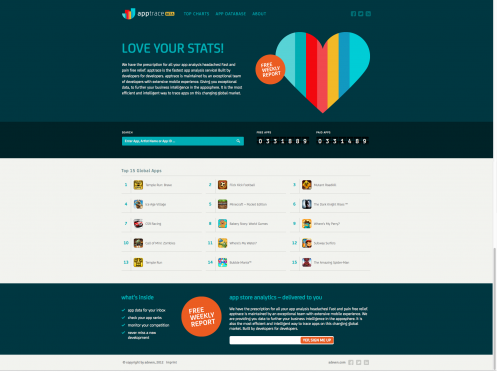 A new tool has been launched from app analytics firm, Adeven. The new tool called Apptrace will provide statistics on iOS apps as well as the worldwide availability of an app, its global ranking, ratings, and market-specific daily rankings. The company also shared some shocking stats on App Store downloads…

While speaking with GigaOM, the company shared some interesting stats about the App Store. According to Adeven, 400,000 apps have zero downloads or rankings:

“The reality is there are only a couple of thousand apps that really make some kind of downloads,” Christian Henschel, Adeven CEO, told me. “This is based on Apple’s closed system — it’s tough to discover those kinds of apps. You don’t have proper search, so the only way to discover new apps is through the top listing.”

“If you’re not on those lists, it’s not sure that you’re being discovered by anyone else. The top 25 tend to be the same companies who spend millions of dollars to get to the top of those lists. If you’re an independent, small app publisher, then it’s really tough to be discovered.”

That’s a large amount of unnoticed apps. I have to agree with Adeven, it’s rather hard to discover every new app that has been released. Sometimes great apps will go unnoticed for months before receiving any notoriety or ranking.

If you enter an app category on the App Store, you basically have a long list of apps to dig through. If you don’t scroll through more than a couple pages, you won’t see thousands of other apps buried in the category. App discovery has always been a notable issue with the App Store.