AAPL Stopped Trading After Crash Due to Wall Street Error 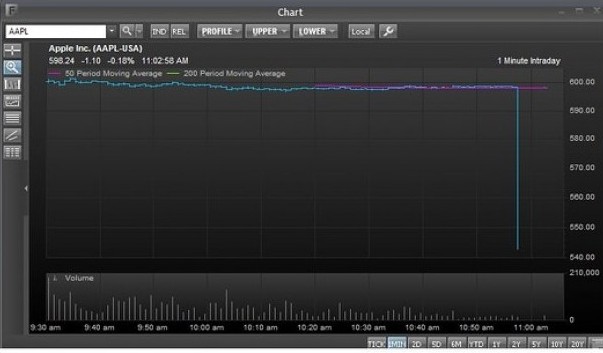 Now here’s something we don’t see everyday. It looks like earlier today Apple‘s stock dropped 9%. Surely such a thing couldn’t happen right after the new iPad was released. That would be crazy!

Now don’t worry current or future investors. Looks like this was just a “glitch in the Matrix”. Earlier though, AAPL crashed 9% to $542.80. That’s a pretty big drop for the world’s biggest company to take! Apple’s trading stopped from 10:57am Eastern to 10:52am. Apparently this error was caused by a “fat-finger trade”, which according to Fortune’s Philip Elmer-DeWitt, is caused by someone pressing the wrong key.

Unfortunately there’s not an app for that…

But don’t worry, Wall Street looked into everything and seems to have it figured out and fixed as after only 5 minutes AAPL opened back up at $598.39.

The new iPad has been flying off the shelves in record numbers, and Apple is on top of the world right now. I don’t foresee any drastic or gradual decline in Apple’s stock any time soon.

Interested in seeing why the new iPad has been selling in record number?

We’re giving one away! Click here for the details!