T-Mobile Says, “Bring Your Own iPhone” And Get Unlimited Data 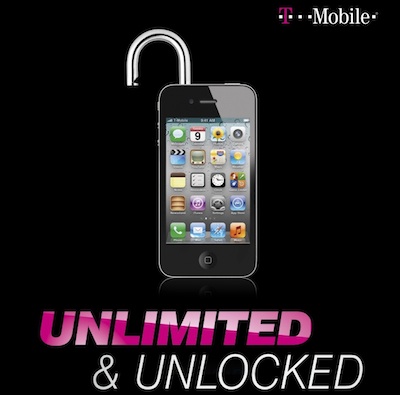 Getting tired of AT&T, Sprint, or Verizon? Another major carrier wants to save you some money. T-Mobile is now officially accepting iPhones on their new unlimited data plans…

T-Mobile just announced a new “Bring Your Own iPhone” campaign to hopefully get you away from your old carrier and on board with them:

We see a big opportunity to make the experience of bringing an unlocked iPhone to T-Mobile even better for customers.

That’s why, beginning September 12th, we’re stepping up our efforts to attract customers with unlocked iPhones to T-Mobile. Each of our branded retail stores will receive an iPhone 4s demo unit and our sales staff will start training to help customers set up their compatible iPhone. We’re also developing iOS versions of helpful T-Mobile applications like T-Mobile myAccount, T-Mobile Visual Voicemail and T-Mobile TV (we already offer an iOS version of our popular Bobsled application).

In fact, we’re already starting to turn up 4G HSPA+ service in our 1900 MHz spectrum. With sites already live in cities like Seattle, Las Vegas, Washington DC and the New York metro area, don’t be surprised to hear reports of iPhone “speed sightings.” We expect to have these improvements deployed in a large number of markets later this year.

If you’d like to sign up for T-Mobile, they’re offering a pretty competitive plan. For $69.99/month you get Unlimited Talk, Text and Data. That’s a lot of savings. Maybe instead of upgrading, you should switch to T-Mobile once your contract is up. It’s ironic because T-Mobile is actually trying to sell against the iPhone, but welcomes your money.