[Patent] Is a 4G LTE MacBook in Our Future?

A recent patent discovered by PatentlyApple illustrates Apple’s innovative idea to include a 4G antenna in future MacBooks. Is Apple looking too far into the future or is this something that could actually be useful…

We’ve seen iterations of netbooks with built-in 3G cellular antennas, so this concept is nothing new universally. But for Apple this could mark the future release of a MacBook Air with built in LTE or even just your standard MacBook Pro. There’s one huge problem with this though, LTE data burns up quickly.

Mobile devices such as the new iPad which includes LTE is super data intensive. I couldn’t imagine how quickly a 5GB data plan would burn up on a MacBook. But either way I find the idea a bit intriguing. The antenna would sit behind the MacBook’s bezel (seen below) in order to prevent any type of interference from the aluminum build. 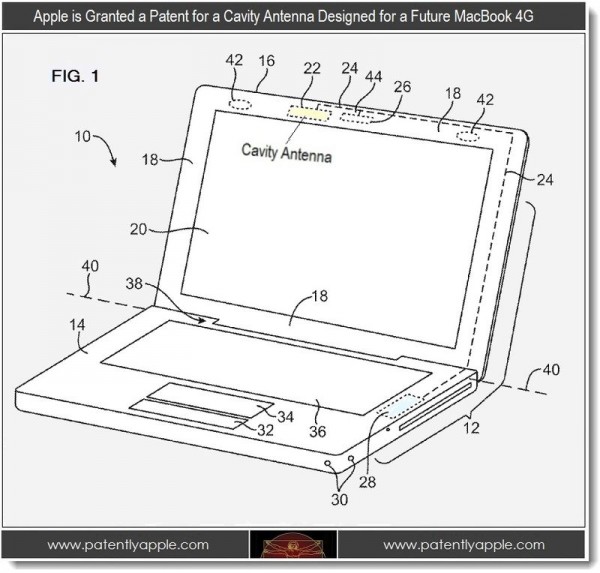 PatentlyApple describes the patent as,

An antenna that may be formed from a conductive cavity that is located behind bezel region 18 noted in patent FIG. 1 above. An antenna with this type of configuration is shown in as antenna 22.

The patent has Enrique Ayala Vazquez, Hao Xu, Gregory Spring, Bing Chiang, Eduardo Camacho and Douglas Kough listed as the inventors. This patent was initially submitted in Q3 2008 and just recently published by the US Patent and Trademark Office.

The fact that Apple was working on concepts like this in 2008 is amazing. Such innovation, years ahead of their technology…

Would you buy a MacBook with 4G LTE?