With the announcement of the iPad 3 just weeks around the corner, it looks like Microsoft is bringing some much needed functionality to our lives with Microsoft Office for iPad. Rupert Murdoch’s magazine The Daily has apparently caught a glimpse of this new “under construction” iPad app. The screenshot below is from the tablet-only magazine showing the app running on an iPad.

Here’s what the Daily had to say about this upcoming “work in progress”.

The app’s user interface is similar to the current OneNote app, but it has hints of Metro, the new design language that can be seen in Windows Phone and in the as-yet-released Windows 8 desktop operating system. Word, Excel and PowerPoint files can be created and edited locally and online.

So apparently this app is nearing completion, but according to some anonymous sources it has been finished and will be submitted to the App Store for approval very soon. Makes me wonder if this will be one of the Apps that plays on any new hardware in the iPad 3. To really use a fully functional word processor or any application from the office family you really do need a decent resolution. I wouldn’t be the least bit surprised if this app came out darn near, or close to when the iPad 3 is released. Microsoft is also developing a version for Android as well. 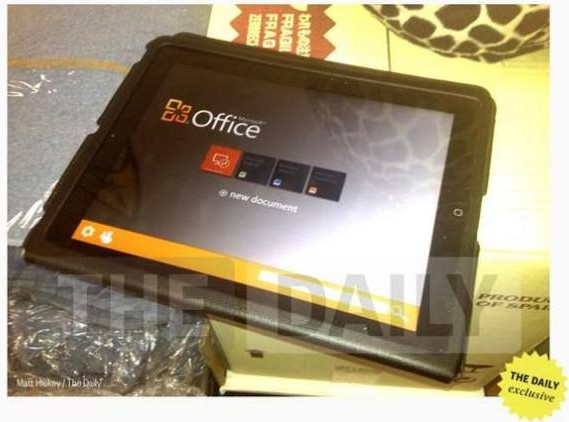 Personally I have always been a fan of Microsoft Office. In my opinion Office is probably one of the few things Microsoft continues to do right and they even have a great version for OS X. The only close competition Microsoft has on standard operating systems is Open Office which provides a similar UI and experience at no cost. As some of you may be aware of though, iOS is a different story… So watch out Documents to Go, Quickoffice, and even Apple’s Pages, Keynote, and Numbers, Microsoft Office is going to give you a run for your money!

The only thing I wonder is how much Microsoft would plan on charging for this new app? To be fair and competitive they would have to price is around $15-$20. I would probably pay that or even more though if it functioned exactly the standard implementation of Office for Mac does.

What kind of price do you think is fair?

“The Daily story is based on inaccurate rumors and speculation. We have no further comment.”

Though they could just be trying to keep it under wraps… Possibly waiting for the upcoming iPad 3?