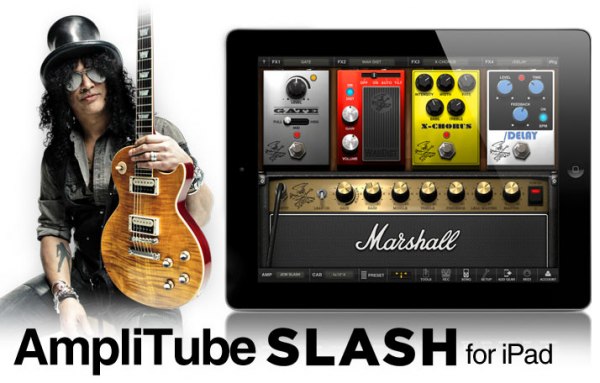 We’re a big fan of music here at macmixing, and I’m especially a fan of good old rock-in-roll. IK Multimedia makes some pretty legit music products for Macs and iOS devices and they just released an app that gives you legendary guitar tone right on your Mac, iPhone, iPad, or iPod Touch…

Guitar God/Legend Slash has given IK Multimedia the secrets to his awesome tone and they have implemented it into an iOS /Mac app! I have yet to try it out, but it seems pretty awesome! Check out the video!

The app comes in three flavors for iPhone/iPod Touch, iPad, and Mac.

I’m very excited to check out this app along with iRig Stomp. We covered iRig Stomp at CES 2012, and I loved everything about it. Stay tuned for reviews on both of these great additions to IK Multimedia’s family. This app works great with the iRig AmpliTube accessory as well.

Our full writeup is coming soon. To find out more about AmpliTube Slash or iRig Stomp visit IK Multimedia’s website.