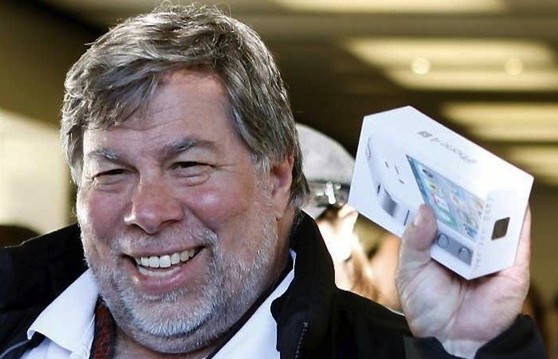 Steve Wozniak, co-founder of Apple definitely loves him some iPhone. He’s always the first to be out waiting in line with everyone else on product launch days for Apple. But despite his love for iOS and all things Apple, Wozniak says Windows Phone apps are “more beautiful” than Android or iOS. He also cracked the joke that maybe Steve Jobs reincarnated inside Mircosoft…

Wozniak explained that while he favors Windows Phone over Android, iOS is still his number one choice.

In a recent interview with A New Domain, Woz explains why he favors the look of Windows Phone over Android or iOS and says the new Nokia Lumia is currently his favorite device.

Just for looks and beauty, I definitely favor the Windows 7 phone over Android.

I’m kind of shocked on every screen — much more beautiful than the same apps on Android and iPhone. So I think that what Microsoft or Nokia did is that they went to some of the key app makers and got them to deliberately make specialized beautiful ones or they put their own themes on.

He goes on to talk a little more about how Android doesn’t compare when it comes to apps. He also said the new Windows Phone makes him think of “great Apple things.”

I did give my opinion that the Windows 7P phone had superior visual appearance and operation cues that were also more attractive. In my opinion, it sets the mark for user interface. I would recommend it over my Android phones given that it doesn’t yet have the breadth of apps.

I also surmised that Steve Jobs might have been reincarnated at MS due to a lot of what I see and feel with this phone making me think of a lot of great Apple things.

What do you think about Wozniak’s opinions?