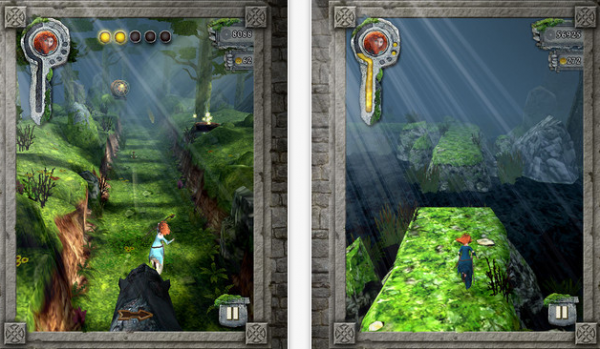 If you’re an iOS fan like me, you’ve more than likely ran into the popular game Temple Run one or more times. If you’re even more like me there hasn’t been a day since its release that you’ve resisted playing the addictive iOS title. Well now there’s another game available with very similar addictive qualities…

Temple Run: Brave is the latest addition to the family. This isn’t some shady ripoff it’s actually a collaborative effort between the creators of Temple Run, Imangi and Disney. The entire game is based off graphics and content from Pixar’s new movie Brave. With Temple Run being one of the top iOS games, it’s no surprise Disney wanted to recreate the game.

Honestly it’s got the same awesome game play plus some additional features:

Ready for the bad news? Well I don’t consider it bad, but the game isn’t free. It’s a $0.99 title available now in the App Store. Honestly not too shabby for Temple Run with some added features. That may be a deal breaker for some, but I’ve downloaded it and it’s pretty cool! Not to mention it’s a universal game as well!

Get the app here.

Have you tried it yet?