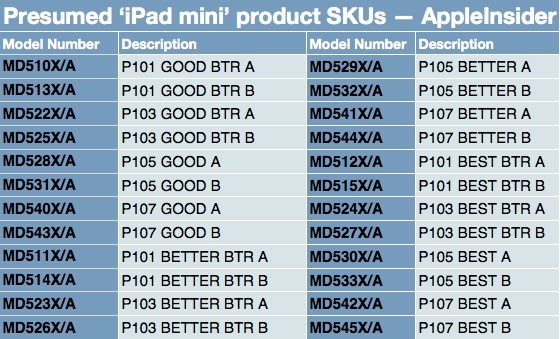 With another rumored keynote just around the corner, there’s a lot of speculation stirring in the iPad mini world. What will Apple offer as a smaller tablet? New leaked information suggests that Apple may have a wide variety of iPad mini models including WiFi, 3G, and LTE flavors.

Each of the four different product descriptions also come with three different distinctions: “GOOD,” “BETTER,” and “BEST,” which could signify Wi-Fi-only, 3G, and 4G LTE models, respectively. Each model is also available in “A” and “B” variants, which likely identify color options of black and white.

One person familiar with Apple’s product inventory said the company’s initial shipments suggest availability of the presumed entry-level “P101” model will be the greatest at launch. An inventory list that surfaced from a retailer last weekend suggested an entry-level 8-gigabyte model could cost around $249.

It’s also possible these names could represent variations of storage capacity, but I’m sure we’ll all find out very soon. While this isn’t anything entirely new, it does give us an idea of what to expect.

What color/model will you purchase?