Launch Day Pre-Order iPads Sold Out For All Models! 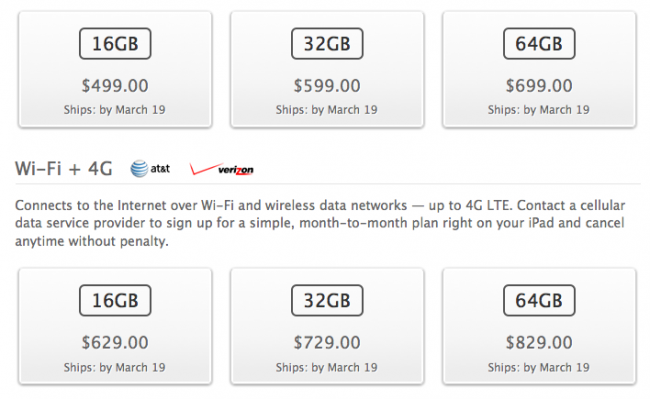 Just two days ago Apple unveiled the new iPad. The third generation iPad packed a lot of hype, an the pre-order page was inaccessible for quite some time after Apple announced that pre-orders started immediately. This isn’t very uncommon for Apple products. But now it looks like if you want to get your hands on a new iPad, you’re going to have to wait until at least March 19th according to the pre-order page.

The other day we noticed that certain 4G models were already slipping on ship dates, but now it looks like all dates across all models have now been delayed.I f you don’t care about launch day, I’d still recommend ordering a new iPad soon as it looks like this is heading in the direction of the iPhone 4S. It will take Apple a while to catch up after the initial stock is gone.

If you missed out on pre-order and you still want a new iPad on launch day I’d pack a sleeping bag and camp out or get ready to wait in a long line come March 16th.