Facebook For iOS Updated To 5.0 And It’s Faster Than Ever Now 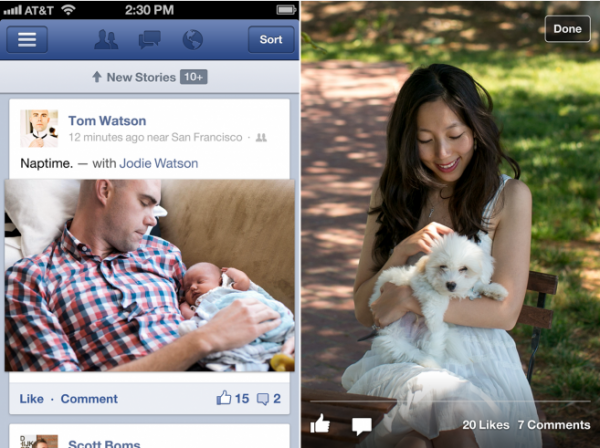 Facebook just launched a new update to their iOS app in the App Store today. Version 5.0 of “The Social Network” app brings a ton of improvements and really lives up to the hype in most cases…

According to Facebook, the app has completely rebuilt from the ground up using Objective C instead of their old app which was HTML5-based, and SUPER sluggish.

Today we’re announcing an update to the Facebook app for iPhone and iPad that makes keeping up with friends faster and easier. Facebook 5.0 for iOS is twice as fast as the previous version when launching the app, scrolling through news feed and opening photos in feed.

We’ve rebuilt the app from the ground up, so now the app opens much faster and your news feed and notifications load right when you open Facebook.

As you scroll down your news feed, all your friends’ stories appear faster than ever. A banner lets you know when new stories come in, and you can tap once to immediately see the latest updates.

Tap on any photo and it opens right away. Pull down to close it with a single swipe.

The newest version of Facebook for iOS is available in the App Store now. It definitely seems to be loading much faster and I’ll probably get on Facebook a little more often now. Loading issues are probably the biggest reason I have avoided checking my profile in the past.

Get it now here.