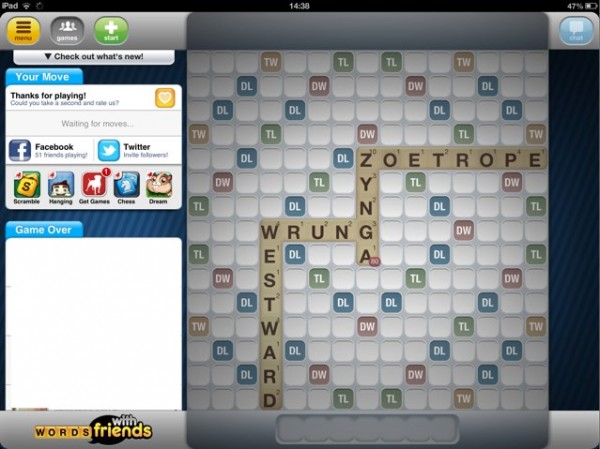 Who doesn’t love a good game of Words With Friends? I know I certainly do. A recent update for the popular app, more specifically the HD version for iPad came out with a few new long-awaited features…

Version 5.0 of Words With Friends HD was released finally bringing support for the new iPad. Yup that’s right kids, you can now enjoy Words With Friends and take advantage of the “resolutionary” Retina Display! The new version just hit the App Store this morning and is available for download or update now.

The update also includes landscape mode! This is a feature I’ve wanting since I started playing Words With Friends on my iPad. Version 5.0 has a major user interface makeover. The new update also brings a sidebar menu. When swiped in portrait mode, one side will expose a list of games you’re involved in and the other will reveal the chat panel of your current game.

The game board is slightly smaller in landscape mode but that’s not a deal breaker. Since you now have super crisp graphics on the new iPad’s Retina display, everything is as clear as can be. Go check it out!