Tweetbot For Mac Is Here As A Public Alpha! 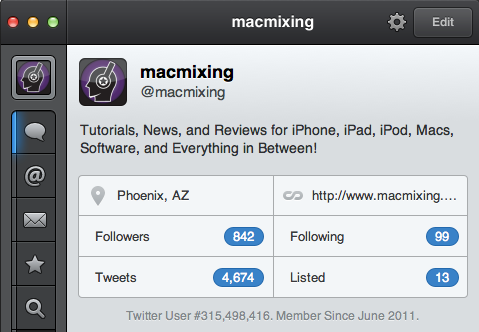 If you’re looking for a good Twitter client for Mac, your dream-come-true is here! Tweetbot for Mac has just been released as a public alpha and it’s here to give Twitter’s client some competition…

Tweetbot by Tapbots was made popular through it’s iOS app. The new Mac version of Tweetbot is just as great and also supports the new MacBook Pro’s Retina display!

Tweetbot for Mac is finally available! However it may not be quite as you had hoped. Developing for the Mac is no easy task, especially a full-featured Twitter client. However, we’ve gotten to a point where while not complete, it is useable. We’ve decided to release it as a public alpha to a) motivate us to finish faster, and b) get feedback to help us build the best Mac incarnation of Tweetbot we can make. You can love it or hate it, but rest assured it will only get much much better from here.

Remember, this is just an alpha version so some things aren’t perfect. Though consider this a long-term trial. The final version will be released in the Mac App Store sometime down the road.