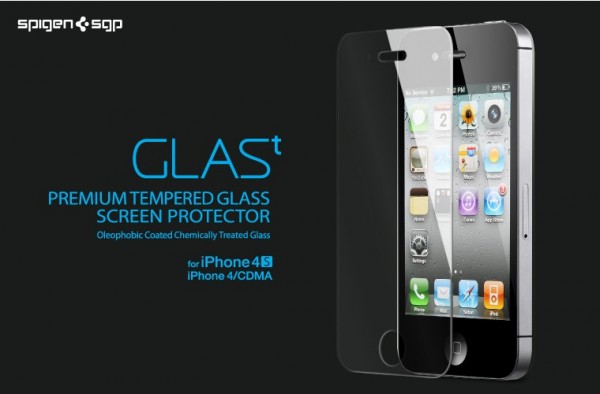 Spigen recently sent me out their innovative GLAS.t screen protector for review. At first I thought, ‘What a silly idea, glass protecting an iPhone…’ But to my surprise, this is probably the best screen protector I’ve ever had…

What a mind-blowing concept right? Let’s protect a glass screen with glass. As simple as the idea may be, it’s quite brilliant. The execution and design is pretty great, and it doesn’t hinder your iPhone one bit. Well not really, but we’ll get to that later.

Check out the video!

The GLAS.t is made from transparent tempered glass and is only 0.4mm thick. It adds little bulk to your iPhone while protecting it with super-human scratch resistance. It’s currently available for only $27.99 on Spigen’s website or Amazon.

I performed a “key test” with the GLASS.t in the video above and the results were quite impressive. Not a single scratch on the GLAS.t after a massive attack from a key. Spigen’s Glass.t also has oleophobic coating to prevent fingerprints, while also making it easier to clean. It has the same coating the iPhone does, so you know it’s legit.

Applied to your iPhone with strong silicon adhesive, the GLAS.t lines up perfectly with your Home button, sensors, and earpiece.

As I said above, this is the best protection I’ve ever seen from a screen protector. I definitely loved every minute I had with the GLAS.t on my iPhone. It’s strong, durable, and protects your iPhone’s screen in the best way possible.

You may think the price is high at $27.99, but if you think about what you’d get from your standard screen protector for about the same price (from Mall kiosk vendors), you really get a much better deal here. I’d love to write more about my love for the GLAS.t, but honestly it’s a great product and I’d recommend it to anyone.

If you’re interested in buying one check it out here.

While I loved every aspect of the GLAS.t’s usability, there are a few caveats to discuss.

First, the edges of the GLAS.t are highly prone to chiping. In fact, Spigen points this out on their website, so I won’t penalize them in the review for being forth coming about the vulnerability issue at hand.

As this is a glass product, please note that the edges of the glass are the most vulnerable areas. We highly recommend that you use case along with your GLAS.t to avoid chipping or cracking the edges of your GLAS.t.

Second, we did notice some issues with the GLAS.t when being used only on a white Verizon iPhone 4. I’ve since been informed by Spigen that the white iPhone 4 from Verizon has a different/weaker sensor then the rest. We experienced issues with the proximity sensor working when the GLAS.t was applied to said iPhone. (It actually wouldn’t work at all.) That being said, I had absolutely no issues on an iPhone 4S, or any other iPhone for that matter.

After a couple weeks I did notice the GLAS.t starting to peel up a little around on of the edges. I don’t know if this is a fault of mine or the products, but for the most part the GLAS.t gets great reviews online. I can only attribute my troubles with peeling to how I handled my iPhone thus far. Though I did inform Spigen of that issue, I also was not using a case with the GLAS.t (which Spigen advises as mentioned above), so that could have attributed to the peeling.

Overall I think Spigen’s GLAS.t is quite an amazing product. Regardless of any problems I had, I would buy ten of them just to show my support. I think it’s a really durable screen protector and will out-perform most any other on the market. Don’t let my problems scare you, I’d definitely give this a chance. It held up great for me, even with a little peeling on the edges. Like Spigen, I would advise that you use a case with your GLAS.t to help protect the edges from breaking or peeling.

Update: I recently performed a hammer test on the GLAS.t, thought I’d put it here with the review. It really shows just how durable it is. I was super impressed by the results. Sorry for the wobbly video, I was shooting it and using the hammer…

If you’d like to buy one you can pick it up here with FREE shipping!

The only reason this doesn’t get a full five star rating is due to the white Verizon iPhone 4 issue, which really isn’t Spigen’s fault as it’s how that particular iPhone was manufactured.