People Are Already Waiting in Line for the New iPad…

Okay, I’ll admit I’m definitely an Apple Fanboy. But as of lately I feel like even I’ve been put in my place. Slashgear recently reported that two young men are apparently already in line outside of the Regent Street Apple Store in London, England to purchase the new iPad on March 16th.

Now call me crazy, but isn’t it a bit early? Well I guess if you love Apple as much as I do, you’d probably doing it too just for the experience, granted time was available. Wait, no you wouldn’t? You mean possibly the night before/day of would be good enough? Oh okay I’ll shut up now. 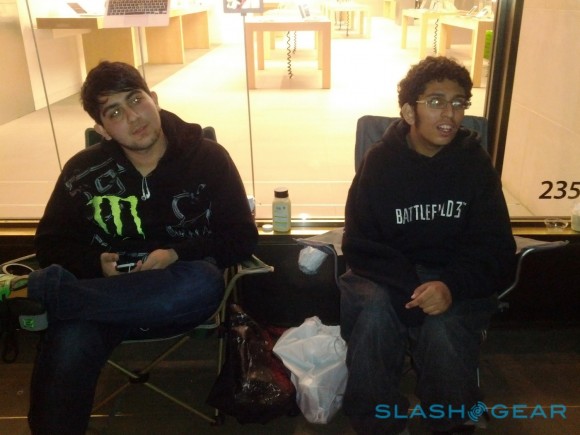 Ali and Zohaib are aparently kicking off the festivities with a 5 day advance experience. Apparently they came ready with folding chairs, warm clothes, and a heart for Apple. (Hopefully they brought at least $499 plus tax…)

The two young men are anxiously waiting and will be for another 4 days until everyone else shows up to join the line. But rest assure, they will definitely get their hands on the, “off the charts” new iPad.

If the new iPad release is anything like we’ve seen with Apple devices in the past, it’s going to be tough to get your hands on one in the first few weeks of release. So if your planning on buying one, pre-order now or expect to wait in a long line.

While I may not have as much ambition as Ali and Zohaib, I do share a couple interests with them. I’m an Apple Fanboy, and Battlefield 3 is a pretty awesome game. If I had time, I’d go just for the experience.

Did you pre-order your new iPad or are you going to wait in line?