Apple launched a brand new iPad accessory at WWDC called the iPad Smart Case. This is the first full-body iPad case Apple has made since the original iPad was released. I’ve taken some time to get to know the new Smart Case in the past couple weeks and here are my thoughts…

The iPad Smart Case is made of polyurethane and despite what you may think the entire case has a soft touch to it. There’s no hard plastic involved. This new case adds functionality that was once only acquired through the purchase of two iPad accessories. The bulk of the Smart Case is a protective glove that your new iPad or iPad 2 locks into.

Check out the video.

I like the iPad Smart Case because it cuts down on the “protect your iPad budget.” You get one case that completely covers your iPad at about half the cost a back case and a Smart Cover would run you together.

The feel of the case is nice. It has a soft touch like the Smart Cover, and also has a nice microfiber lining on the inside. Not much else to touch on in this department. The outside also sports a white Apple logo, in case you would miss the one on your iPad.

I tried REALLY hard to make this my go-to case for the iPad. It combines most all the qualities I’ve yearned for in separate protection methods I’ve pieced together. But overall I couldn’t keep it on my iPad. There’s a few caveats to look at here.

The edge of the Smart Case is something that really needs to be refined. It’s really sharp! Not cut your hand sharp, but pointy enough to get annoying after a long game of Asphalt 7.

There’s also an obnoxiously large “framing” around the iPad. I’m not sure why Apple didn’t go with clips to hold the Smart Case on, but probably because plastic breaks. Either way the extra border around the iPad isn’t anything that gets in the way, just seems unnecessary.

I also experienced some issues trying to stand the iPad up in landscape view. Seemed a little wobbly for my taste. Other than those few inconveniences, it’s definitely an iPad case.

The iPad Smart Case leaves something to be desired. It honestly doesn’t feel quite like an Apple product. And trust me, I really wanted to give this a first class review. I’m the biggest Apple fanboy, but I hate to say this Smart Case is almost worth the money.

You may not find the small cons I discovered to be that big of a deal, but I’d rather stick with my Belkin Snap Shield and the black leather Smart Cover. The iPad Smart Case is definitely for some, just not for me.

I think I just cried a little giving an Apple product a 3.5 star rating. 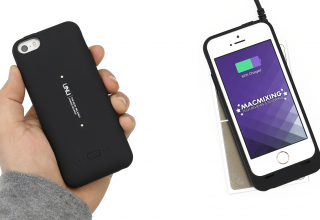