App Scam: Watch Out For Halo 4 In The App Store

If you happen to come across an app called “Halo 4,” don’t download it unless you want to purchase a $4.99 chess game. At first glance, everything appears to be completely normal. The app even has screenshots from the “game,” but if you take a look at the reviews, you’ll notice a few red flags.

This is what one unfortunate buyer had to say:

Bought this app because I thought it had to do with halo 4. Instead, it is nothing more than a chess game. This is a serious false advertising issue and I am contacting the proper federal administrative agency to handle this situation. DO NOT BUY! SCAM! Fraud!

Here’s the description from the App Store:

Halo 4 for iPhone/iPad is the fourth installment in the Halo series where Master Chief returns to battle an ancient evil bent on vengeance and annihilation.

This version is iPhone/iPad exclusive.

It’s very possible that this app will remain live through the holidays during Apple’s scheduled iTunes Connect vacation. Be sure to warn your friends and family, this app is a total scam. Hopefully this fraud will get pulled before too many people are scammed.

Update: Beware! There are TWO Halo 4 apps in the App Store. Both are fake.

Here’s a screenshot of what you’ll get by purchasing the fake games (via TechCrunch): 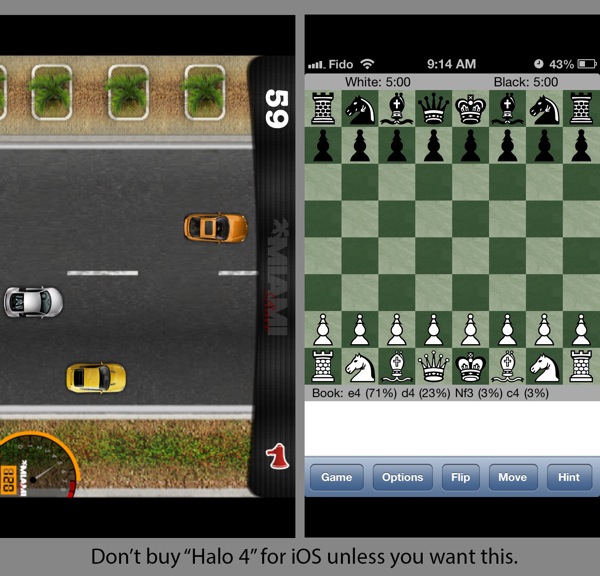 Come on! If you’re going to release a fake Halo 4 game, at least make it compatible with the iPhone 5. This is just pathetic.