With so many apps in the MASSIVE App Store few shine out through the dark and become Production Companion Favorites. The guys over at iXimix have done it again! I present to you.. The xMix – Logic Edition DAW Controller. This thing is powerful. It also has such a small price tag for such a great tool. iXimix was kind enough to provide us with a copy of the newly released app and I must say, I was HIGHLY impressed. One of the most important weapons in a Producer/Engineer’s arsenal is the environment and condition of which they mix in. Talk about comfort… xMix provides everything you need to boss a Logic session around with ease. I was literally able to mix down a song I created in Logic with hardly any keyboard or mouse use, and I mean hardly any. The xMix – Logic Edition Controller provides every tool and shortcut you would get on a standard Mackie Controller, PLUS SOME.

The layout is very sleek. iXimix isn’t shy with their design skills. Every inch of your iPad will be filled with crisp clean and down right, righteous controllerness. ( I don’t think that’s a word.)
The Greatest thing about xMix is how easy it is to setup. No Host applications, no fiddling around with settings. Just PURE Core Midi. 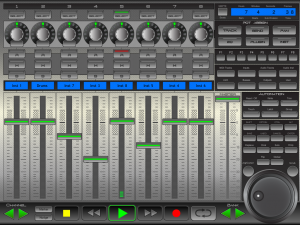 As Soon as I applied the settings All my Track names Lit up on the built in Scribble LCD strip displays, and my faders automatically adjusted accordingly. Best thing was, I experienced ZERO latency with this app! I have tried one other Logic control surface for iPad and this one blew “nameless” out of the water! I was also surprised on how easy some of the buttons and rotaries were to control. I am always skeptic about touch sensitive rotaries, but these ones worked great.

Right iXimix? I truely am giving you my honest opinions here guys! This app can run your life if you let it. Like I said I was able to do just about everything I wanted to from this app. ust shy of quitting out of Logic, every command is at your fingertips. I love the fact that I can lean back in my studio chair and and mix in a relaxed state instead of being hunched over my keyboard the whole time. That really helps put the creativity back in my production flow. If you let it, xMix can increase your work flow ten fold! I am very appreciative of the chance to get to test-drive this app. That being said, Test-Drive is hardly the case. I started out with a “Test-Drive” on the car lot, then drove the car straight to Mexico and never looked back. This is a permanent tool of mine now! In the studio, in the car with my laptop. Wherever my production endeavors may take me, I will have this little baby opened up and “xMix”in’ away.

I can’ get over the fact that the title of the app is “xMix – Logic Edition”…. So  that must ONLY mean that I will be able to accompany some of my other DAW’s and or musical productions with another similar brother or sister version of xMix Logic Edition. Go Check it out guys:

xMix on the App Store

Be sure to follow these guys on Twitter @iXimix for the latest details on this app and the series!