As a musician, iRig Stomp makes a couple dreams come true. I can virtually tie in any guitar amp sound or effects pedal right into my setup. Having an app do all the work is a heck of a lot cheaper than buying all of those amps and pedals individually. 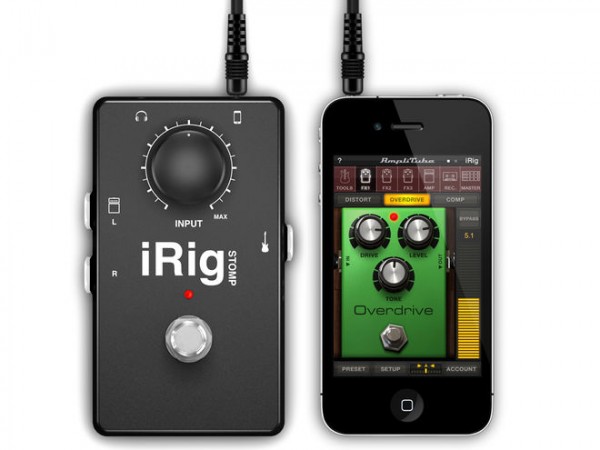 I had a chance to check out iRig Stomp at CES 2012. I was instantly impressed with the functionality this small device brought to the table. I’ve had a chance to spend some time with iRig Stomp, and I can definitely say it’s nothing short of amazing…

This new device from IK Multimedia transforms your iPhone, iPad, or iPod touch into a full on guitar rig. The simplicity of the device is definitely one of its strong points. Simply plug in your iOS device, plug in a guitar and headphones, then rock out. Of course, it works great with other pedals and equipment as well but they’re not necessary.

The best part about iRig Stomp is that you don’t need a massive setup. You can use it as a standalone piece of equipment. Powered by IK Multimedia’s AmpliTube apps (or any other amp simluator for iOS) and a 9-volt battery, iRig Stomp can easily work well by itself, or paired with a massive collection of pedals and amps. It’s the perfect way to mix iOS and guitar playing.

How does it work? IK Multimedia has the best and simplest explanation for that question:

… it’s basically a stompbox interface for your iOS device that allows you to use your iPhone/iPod touch/iPad with your existing pedalboard and rig. Or, you can use just the iRig Stomp. It’s constructed from durable military-grade aluminum for indestructible performance (unless you run over it with a tank), and has the same switch you find on todays most popular foot pedals …

They definitely aren’t joking about the quality. It feels just as solid as any other guitar pedal I’ve ever owned. When iRig Stomp is connected through your setup and iOS device, you have the ability to silence the apps at any time. Just stomp on the pedal to bypass the apps effects. It’s super simple.

As a musician,  iRig Stomp makes a couple dreams come true. I can virtually tie in any guitar amp sound or effects pedal right into my setup. Having an app do all the work is a heck of a lot cheaper than buying all of those amps and pedals individually.

Like I said, iRig Stomp with AmpliTube also works alone and without a big setup. It’s great for practicing because you can still manipulate a physical pedal while playing to give your music dynamics. Instead of pausing a second and tapping the screen, which we all know doesn’t always work out great, iRig Stomp adds that much needed physical aspect to the iOS guitar amp simulator universe.

It’s also compatible with any other guitar amp simulator for iOS. So don’t worry, it’s not necessary to download the free version of AmpliTube to use it. But hey, it’s free so why not?

I really don’t have anything to add in this department. I can’t even complain about the price. At $59.99, you’re practically stealing this thing from IK Multimedia. It’s made from high quality and industry comparable parts, and you should definitely check it out.

I think iRig Stomp is a valuable tool for any guitarist or bassist. This accessory definitely filled a gaping hole in my musical world. I can take iRig Stomp with me anywhere, and with some headphones, I have a virtual on-the-go guitar setup. When I’m at home, it’s got a special place in my guitar rig. I highly recommend iRig Stomp or any other products from IK Multimedia.

If you’re interested in purchasing iRig Stomp, you can check it out here. 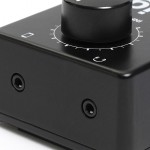 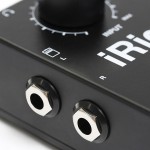 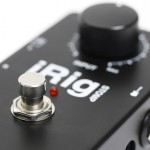 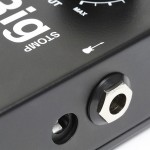