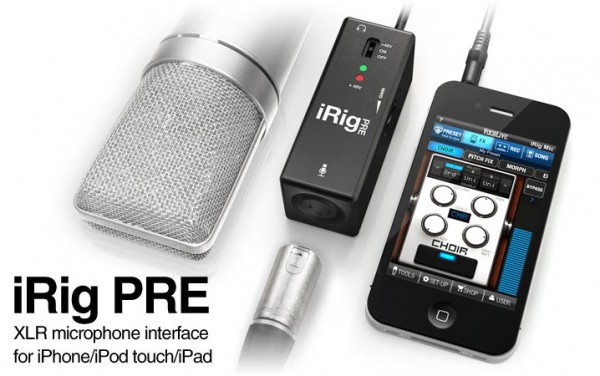 I’ve been a big fan of IK Multimedia for a long time, and they’ve never failed to impress me with their innovation. In my opinion, they create some of the best iOS music accessories your money can buy. Their latest device, iRig PRE, is no different…

I was first introduced to iRig PRE back at CES 2012 in January. I was thoroughly impressed with the capabilities that this little black box offers to iOS devices, and knew it would be a hit when it was released.

If your curious, iRig PRE is a mini preamp for your iOS device. It comes complete with an XLR input, gain dial, and a headphone jack (for real-time monitoring).

The concept is genius: Take your favorite microphone and plug it into your iOS device using iRig PRE. It’s seriously that simple. This awesome little box also includes a Phantom Power switch, making it compatible with almost any microphone. It also runs on a single 9 volt battery and fits in your pocket.

I was shocked at how great iRig PRE worked. In the video demonstration above, you can hear the quality of the iRig PRE. I was able to plug a Shure SM7 right into my iPhone and record broadcast quality sound, right from my couch. You really have to hear it to believe it.

The build quality of iRig PRE is excellent. Yes, it’s made from plastic, but that doesn’t mean it’s not built like a tank. I also love that because iRig PRE uses the headphone jack on iOS devices, it’s completely compatible with the iPhone 5.

Are you kidding? Nothing to say here.

This baby only runs $39.99, and in my opinion, it’s the best accessory from IK Multimedia ever. Period. I’d even go as far as saying this tops all other music accessories I’ve ever seen. It’s totally innovative, and brings a much-needed feature to the recording world and iOS devices.

IK Multimedia’s iRig PRE definitely takes the top spot in my life as far as iOS recording accessories are concerned. To find our more information about iRig PRE or to purchase one, you can check it out here.