This is definitely something from the future. Apple’s recently published patent reveals a slap bracelet iWatch design with a flexible display that wraps around your wrist. Just think, you could display a neon ’90s design/pattern on it and turn it into a retro bracelet.

The new patent was discovered by PatentlyApple:

The bracelet goes far beyond being a wristwatch. Apple states that with a multitouch display, the user “can accomplish a number of different tasks including adjusting the order of a current playlist, or reviewing a list of recent phone calls. A response to a current text message can even be managed given a simple virtual keyboard configuration across the face of the flexible display.”… According to Apple, a larger display is also more desirable for map viewing. The arm mounted location makes map viewing a desirable function for such a device, as a traveler or explorer can easily reference the information with a flick of the wrist while exploring …

… Apple states that the Kinetic energy gathering device noted above in patent figure 5A (# 502) has its advantages. Having the accessory device on an extremity is an ideal location for gathering kinetic energy. The simple motion of a user’s arm or leg allows the accessory device to harness some of that energy for charging battery. The Antenna in patent figure 5A (# 506) is for establishing and maintaining the connection between the bracelet accessory and a portable electronic device such an iPhone. The antenna can be configured to pass data over WiFi, Bluetooth or any other suitable wireless protocol.

I’m definitely a little skeptical about this design. It’s probably possible at some point in time, but I don’t see something like this releasing at any affordable price point any time soon. Maybe I’m wrong and we’ll all be walking around sporting throwback slap bracelets in a year or so. Bring it on, Apple!

Check out the gallery including a mockup design below: 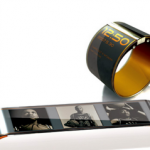 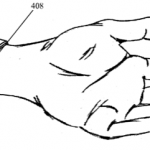 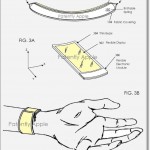 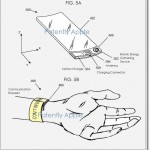